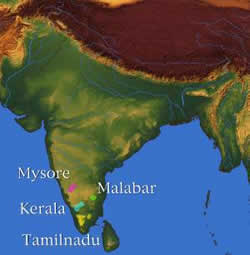 Indian coffees sometime seem to get lost among the chaos and crowds of this enormous universe of a country. This is a shame since they are a wonderful part of the coffee spectrum, with low acidity, medium to full body, and subtly spiced in the cup.

Indian coffee has its own terminology. Dry-processed coffee is called Cherry, whereas wet-proceed arabica is named plantation arabica, even if it is not from a plantation. Wet-processed robusta (often used in espresso) is called parchment robusta.

Occasionally when looking through a bag you might come along a bright green coffee bean. This is because Indian coffee for the domestic market is dyed with a bright green vegetable dye, and this stray bean made the boat out of Madras. While this may sound like a strange practice, just remember that pistachios are not pink in nature either. Someone decided that it would be cool to dye the shells.

Historically, it took six months or longer for the coffees leaving India in the wooden hulls of sailing ships to make it down the East African Coast, around the Cape (many here being smashed on the rocks) and then up the Western coast of Africa to Europe.

During this time the Indian coffee, which was subject to monsoon humidity in port, took the flavor of wood and the sea. After the invention of the steamer and the Suez Cannel, this long trip was shortened, and this "monsooned" flavor disappeared. But this flavor was missed, and thus was born Monsooned Malabar

To make, or "Monsoon" the coffee, plantation arabica is laid out in the open and exposed to monsoon winds and rains for about a week, then placed in bags in warehouses exposed to the salt and sea winds during the monsoon season.

The beans swell with moisture and turn a pale yellow. This coffee tastes like no other, and it is usually a love-hate relationship. You either love this funky, low-acid, salty briny solution, or you think it tastes like the river Ganges, which, though Holy, has bodies and cows often floating between its banks.

Well, if that did not turn you off completely, and it should not, give this Monsooned Malabar a try, and test it in your espresso blend (no more than 10 percent, or you might inadvertently take a life in the process).

And, most definitely, try Indian coffees in general. Don't let them become the "Lost sub-Continent" of the coffee world.

Introduced: Indroduced in 1610 from Yemen by Muslim pilgrim Bababdan Sahib.

Go To Our Specialty-Coffee-Advisor HOME PAGE! 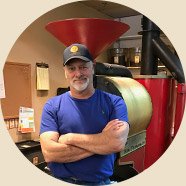